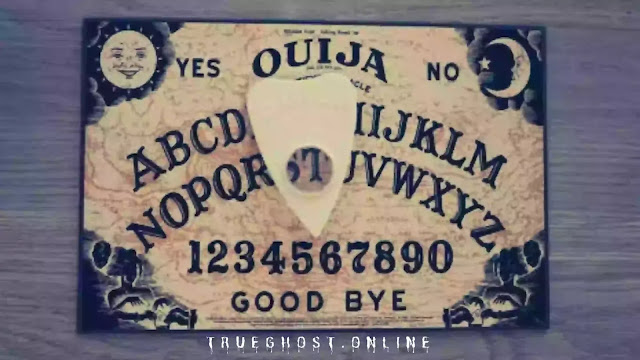 Most of us encountered it as children. Somebody brought it to a sleepover or packed it for a camping trip. It was a game, a toy. But more than that, it was a device that supposedly allowed us to contact the spirit world. And in our popular culture, no other board game can claim to be associated with so many ghost stories and tales of the paranormal. Today we're going to reach out and touch the terrifying secret history of the Ouija board.

As the 19th century progressed, the stories of so-called talking boards captured the public's imagination. There was no standard Ouija, as we know it today. These talking boards varied widely in their layout and style. But each had numbers, small words, and letters arranged on a wooden plank. And these talking boards all promised users they could communicate with the great beyond.
Much like today's Ouija boards, users would manipulate a planchette. And if a spirit were nearby, it might speak through the holder of the planchette by forming words or sentences.
Many believe in the mystical occult powers of the board. Skeptics, however, scoff that talking boards and today's Ouija boards are just a manipulation of our collective subconscious. Or simply, a form of automatic writing, known as the psychological ideomotor effect.
Either way, users have long reported getting messages from the afterworld while using the talking boards and what we now know as the Ouija board. But the practice of using board and planchette to communicate with the paranormal actually has a lengthy history that stretches around the globe.
In fact, evidence of the first automatic writing methods was found in China, dating back to 1100 AD. Known as Fuji or planchette writing, the ancient art is said to have been used to contact the ancestors. The dearly departed family members whose memory and honor were kept alive by their living descendants.
Some also believe that Fuji was used to reanimate the dead through the dark practice of necromancy.

The talking board phenomenon in America really took off in the late 1800s, with its first widespread boom in popularity. The main driving force behind this was the rising tide of wealth in the US and in Europe. Some people had more free time and money and we're able to explore their fascination with what may lie beyond the valley between life and death.
Another key contributing factor to the rising popularity of talking boards was an undeniable reality. The median life expectancy at the time was roughly 55 years of age. This wealth and prosperity coupled with tragic loss made people look outside of traditional religion for a means to understand death and attempt to reconnect with their loved ones. And with the rise of this need to understand death, a movement we now call the spiritualists gained some serious traction in the states and in Europe.
The talking board was one of the main tools used by the spiritualists. These spirit boards, as they were also called, allowed mediums to connect with the dearly and recently departed. There are many compelling stories of true-life paranormal events from this time period.
However, there's also the reality that many of these mediums were simple grifters. Conmen attempting to take money from the recently bereft. Over the next decade, a wide network of charlatans and tricksters sprung up throughout America.

As more people used talking boards, more boards needed to be produced. Capitalists and spiritualists alike filed several patents and numerous boards were brought to market. But the quintessential talking board, the one that would eclipse all others, was created in 1891 by Charles Kennard and businessman Elijah Bond. Together, they brought a talking board into the world that quickly became the gold standard. They called it an Ouija board.
Why Ouija, with that strange spelling O-U-I-J-A? No one really knows. Some believe that it could have been named after a famous author of the period who went by the pseudonym Ouida-- O-U-I-D-A. Perhaps it doesn't matter. Because whatever the true origin of the name, the Ouija board became wildly popular.
So much so, that over the course of just a few years, it virtually replaced every other existing option. People simply began referring to any and all talking boards as Ouija boards.

William Fuld was a businessman and investor from Baltimore, Maryland. By the end of his life, Fuld had 33 patents, trademarks, or copyrights to his name. However, the thing he is most widely remembered for is the Ouija board. In fact, he's considered the father of the Ouija board.
Now, how is that possible, since the Ouija board was created by Kennard and Bond? After some backroom drama and a buyout, Fuld took over their company, forced them out, and changed the name to the Ouija Novelty Company.
Up until his death in 1927, William Fuld ran the company and branded himself as the creator of the Ouija board. We'll never know how the Ouija board would have fared under Kennard and Bond. But we do know that Fuld and his company took the Ouija board from being a fad to something that would last forever.
At one point in 1920, Fuld claimed that the board had made him a million in profit. Is that true? Fuld was a notorious prankster. And his personality was closer to a carnival barker than the creator of a children's board game. But Fuld's larger-than-life persona helped solidify him as the board's creator in the eyes of the public.

The next big shift in the history of the Ouija board came when an author named Pearl Curran wrote a series of books that would sear the Ouija board into the imagination of the American people in a way that no one could have expected.
Born in 1883, Pearl Curran was a housewife with an interest in the written word. She spent most of her life in St. Louis, Louisiana. Where, at the age of 24, she met and married a man named John Howard Curran.
In the summer of 1912, Pearl first encountered an Ouija board owned by a friend of her husband. Over time, Pearl became more and more interested in the Ouija board. And slowly became obsessed with using it to attempt to contact the spirit world.
The following year, Pearl would claim to have an encounter with the afterlife that was unlike anything she'd ever experienced. During one of her sessions, a message came through the board. A message of stern intensity. It said,

many moons ago, I lived. Again, I come. Patience Worth, my name. Wait, I would speak with thee. If thou shalt live, then so shall I. I make my bread at thy hearth. Good friends, let us be merry. The time for work is passed. Let the tabby drowse and blink her wisdom to the fire log.

This would be the first exchange in something not seen in American letters before or since. Pearl Curran began a near-daily correspondence with the afterlife. She began receiving tomes of messages from this Patience Worth. And then Pearl came to a realization.
Patience Worth was writing a book. She was dictating it to Pearl from the great beyond. Pearl was, in fact, the conduit for the words of the deceased writer named Patience Worth. That gives new meaning to the phrase ghostwriter.
Pearl's story and the books she wrote with Patience took the country by storm. Together, they wrote the books Telka, The Sorry Story, Hope Trueblood, The Pot Upon the Wheel, Samuel Wheaton, An Elizabethan Mask, and several collections of short stories and poems. Pearl Curran, her connection to the afterlife, and her stories became famous and most certainly helped make the Ouija board legendary.

Similar to the rise in spiritualism around the Civil War, the global upheaval of the First World War followed by a deadly flu pandemic led people to seek existential answers and spiritual solace in non-traditional places. Things were bleak, indeed. And the Ouija board was becoming an increasingly powerful cultural force.
More and more mediums popped up across the country. Most Americans accepted the Ouija board as a divining tool. It wasn't a question of whether or not it really allowed communication with the spirit world. It was a common understanding. People didn't necessarily see the Ouija board as a children's plaything. They associate it with objects of the occult, like tarot cards and crystal balls.

Most Famous Cases of Ouija Boards 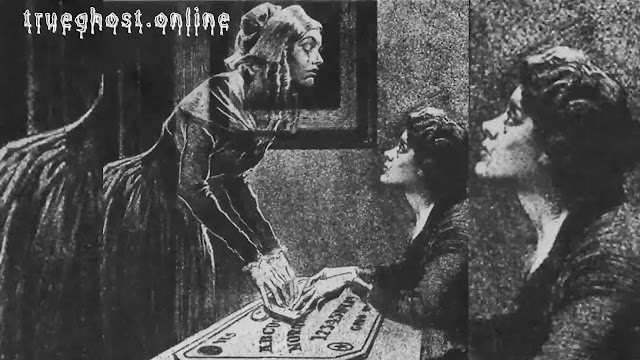 Throughout the next few decades, the Ouija board seemed to be everywhere. It became a near-global constant. The famous and, in some cases, infamous stories surrounding the Ouija board are so ever-present, that it's almost impossible to cover them all.
However, here's a quick rundown of some of the most iconic cases that feature the Ouija board prominently over the last 100 years.
During the previously mentioned First World War, EH Jones and CW Hill were two soldiers who were captured by the Turks. The two men put their heads together and concocted a wild plan to escape from the [INAUDIBLE] prison camp. They were able to convince their captors that they were mediums. And using an Ouija board had been contacted by spirits that told of buried treasure. During the attempted excavation of the bogus treasure, the two men made a daring escape.
In the 1940s, the case of a small boy and the priests who performed exorcisms on him to no avail captured the public's imagination. This boy, Ronald Doe as he was often referred to, or Robbie Mannheim, as he's sometimes called, was said to be possessed by a demonic force. But what most interests us is that the force was believed to have entered his body after his aunt showed him how to use an Ouija board.
The story took on a life all its own. And was eventually adapted into the novel The Exorcist, in 1971, by William Peter Blatty. The Ouija board's cold fingers stretch all the way to today. In 2007, a boy named Joshua Tucker was accused of a double homicide in West Richland, Washington. Court testimony held that he was allegedly driven to commit the crime after an encounter with a spirit through an Ouija board.

By the end of the Second World War, the Ouija board had cemented itself into the lives of everyday Americans. William Fuld's company still controlled the rights, but the company was slipping. By 1966, the company received an offer they couldn't refuse.
The Fuld Company, which had renamed itself after financial hardships as the Ouija Novelty Company, was approached by Parker Brothers proposing to buy their iconic toy.
After initially rejecting the idea, the company eventually agreed to sell the rights to the Ouija board. And the Parker Brothers kicked off a massive marketing push. Their timing was fortuitous. The so-called satanic panic of the '70s was just around the corner. And the 1960s had figures like Anton LaVey pushing occult stories and urban legends into the mainstream.
In 1967, the marketing push paid off big time with a jaw-dropping tidal wave of sales of the newly acquired Parker Brothers Ouija board. Well over 2 million were sold that year. Out-selling the game of Monopoly.
And the Ouija board has been a firm fixture in our pop culture ever since. Multiple movies have used it as a basis for their stories. Books have been written about it and by it. And even video game creators are using it to harness the cultural preoccupation with the great beyond. It's safe to say, the Ouija board isn't going away anytime soon.
So what do you think? Is the Ouija board actually a legitimate means to contact the spirit world? Is it more than just a board game to play with on a dark and stormy night? Is it a potentially dangerous portal exposing users to demons and evil spirits? Or is it all just a collective hoax? A reflection of our fascination with and fear of the afterlife?