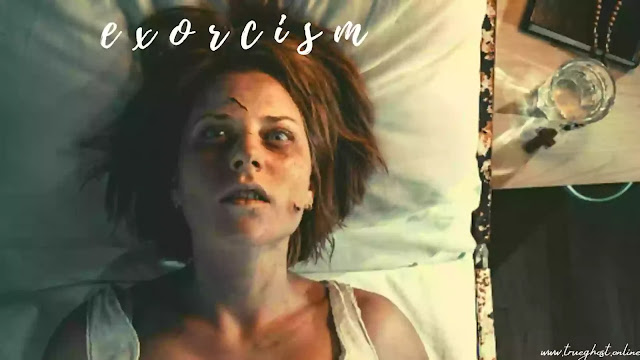 The Exorcist is the 1973 William Fried kin film that sent seismic shock waves through God-loving and God-fearing America in a post-Manson era where satanic panic was on the rise in the suburbs.

I guess it shows how far some people will go for the thrill of being chilled to the bone.

Many are aware the film is based on the book of the same name by author William Peter Blatty but not as well known as the true story of the possession of Roland Doe that inspired Blatty's novel. People protested that The Exorcist exposed younger viewers to satanic imagery. But if they knew what really happened to 13-year-old Roland in 1949, they'd perhaps view it as more of a warning than a glorification.
Will Blatty, the son of a devoutly Catholic mother, was in his second to last year at Georgetown pursuing his master's degree in English when he came across a Washington Post headline that stopped him cold.

The idea of a demon exorcism stuck itself in the young writer's mind, but he stowed it away. It wasn't until 20 years later, after finding success as a novelist and screenwriter, that Blatty started writing the novel, The Exorcist, based upon the story he read in Georgetown all those years ago.
Before The Exorcist changed everything, exorcisms like the one performed on Roland were rare occurrences happening in only extreme situations. After the film came out, and the concept of a demonic exorcism reached mainstream attention, the number of reported real-life exorcisms started increasing exponentially.
Of course, the Catholic Church blamed it on the usual suspect's pornography, drugs, and the failure of the mental health care system in the United States have many people experimenting with paganism and atheism. Stories like Roland's were few and far between in the early 20th century.
Newspapers got minor details wrong, like the boy's age and where the event actually took place. We don't even know Roland's real name. But what we were able to uncover is both chilling and heartbreaking.

Roland was an only child and not very good at making friends, so, he found kinship with the adults in his life, but none were any closer than his aunt who we'll call Tilly. Tilly was a spiritual woman and introduced Roland to objects and concepts related to the occult, including Ouija boards, which they played together. Aunt Tilly died at the age of 54, and it was shortly thereafter that Roland started exhibiting strange behaviors.
According to one of the priests who later performed the exorcism, when it was asked if the spirit possessing Roland could knock three times if it was Aunt Tilly, three ominous knocks were heard by everyone in the room.
Roland's family told the priests that ever since Aunt Tilly had died, objects near Roland would levitate and often violently fly across the room and break. It got so bad that Roland had to be removed from school as his desk would shake so badly it disturbed everyone around him.
After things became too much for Roland's family to maintain, spiritual help was called in. When a priest first met with Roland, he suddenly burst out screaming,

"Oh, priest of Christ, you know that I am the devil."

And as far as anyone knew, the 13-year-old boy spoke no Latin whatsoever.
While it is possible he picked up on some Latin from attending church for most of his life, his family believed the devil was truly speaking through him.
An attempt was made to exorcise a demon from Roland's body twice over a period of several months. The first attempt allegedly ended in minor bloodshed. Initially, Roland was brought to the home of his local pastor, and it was there that the boy was tied by his arms and legs to a bed, much like Regan MacNeil is in The Exorcist.
n the middle of the stress and chaos of the rite, Roland managed to reach beneath the mattress and tear a metal spring from underneath it, which he then used to slash the pastor's arm. The gash was deep enough that it needed several stitches, and the exorcism was temporarily put on hold while the priests regrouped.
While there's no physical evidence of this occurring, many people believe it did happen, and it managed to make enough of an impression on Blatty's imagination that he included it in his fictional interpretation of the events years later.
From the very beginning, one of the more alarming aspects of Roland's alleged possession was the repeated occurrence of mysterious scratches spontaneously appearing on his body. As the story goes, one of these scratches formed actual words on his chest that read "St. Louis."
Roland's parents took this as a direct sign and packed up the whole family on the first train over to St. Louis, Missouri. There, the desperate family met a reverend named William S. Bowdern. And it was this man of God, a complete stranger to the family, who witnessed Poland's disturbing behavior for himself. The reverend ended up performing an intense marathon of between 20 and 30 rites of exorcism on the boy over the course of two months.
t was during one of these sessions that even more words started appearing scratched into Roland's ravaged body, including the words "Hell" and "Evil." It was after this that things turned violent with Roland now violently resisting, convulsing, hissing in a disturbing voice, and even eventually breaking the nose of one of Bowdern's assistants as they tried to restrain him.
Despite all this, the struggle eventually paid off, and Roland was seemingly cured of whatever affliction was tormenting him. Whether it was the devil, the spirit of his occult-obsessed relative, or something else, Roland was back to normal and able to return to his life with his identity secured.
Little would he know that the events that transpired around and within him in 1949 would have larger cultural ramifications just a few decades later.
Years after the fact, after The Exorcist had come out and inspired untold hundreds of copycat exorcisms and alleged supernatural phenomena, writer Mark Opsasnick attempted to find a clear consensus of what actually happened with Roland Doe.

Was he possessed? A troubled teenage boy?

The answers today are as vague as they were back then. An attempt by Opsasnick was made to reach out to Roland as an adult to get the final word on the story from the very subject himself, but it turned out to be a fruitless endeavor. Roland was still alive. He had seen The Exorcist. But he had no interest in recounting the events of what happened to him in 1949.
Opsasnick believes Roland was never really possessed, and that the various accounts, recordings, and viewpoints on the matter are all manipulations of the truth by the different witnesses involved to suit their own needs. He wrote, quote,

To psychiatrists, Roland Doe suffered from mental illness. To priests, This was a case of demonic possession. To writers and film and video producers, this was a great story to exploit for profit. Those involved saw what they were trained to see.

Everyone involved, even those with godly intentions, were ultimately seeing things through their own perspective. No one really had an objective viewpoint on what really happened. And as such, this story may forever remain just an urban myth that inspired even more horrifying stories decades later.
Despite the cases of apparent legitimate demonic possessions, exorcisms are still only considered a truly last-ditch effort by the Catholic Church when all other methods, scientific and natural, have failed. In Roland's case, they apparently saw no other recourse to explain the strange phenomena that were associated with him, which is how he ended up having the rites performed.
However, the church still maintains that most cases of demonic possession are really nothing so fantastic. They suggest the true causes of these phenomena are likely to be more mundane, such as a deterioration of mental health, and exposure to sinful stimulations, and that a person more likely needs to see a doctor or a therapist to help with whatever condition is ailing them.
Beyond that, simple spiritual counseling may suffice as opposed to a full-on exorcism. For Roland, it's entirely possible he was just acting out. He may have just been a lonely kid acting out after the death of his beloved aunt and friend.
Since we only have the testimony of those involved to go on, it's very possible we haven't gotten the whole truth and never will.
The events that happened transpired so long ago, and with most of those involved surely dead, we will probably never get a straight answer on what really happened.
What we can surmise happened is something truly disturbed this boy, and whatever was going on with him was enough to disturb his family and local pastor so badly that they were driven to take drastic action. Something did happen to Roland, something that terrified the senses of those around him. It was enough that his terror reached the rest of the world and filtered through the imagination of writers and filmmakers.
Now, whatever haunted Roland haunts us. Was it a demon? A ghost? Probably not, but it could have been something much more elemental that's disturbed the sensibilities of people for generations.
That our children, no matter how well we raise them and how much we love them, can still have something inside of them we can't explain, something that scares us, something that could even hurt us worse than the devil himself.

What do you think happened to Roland?