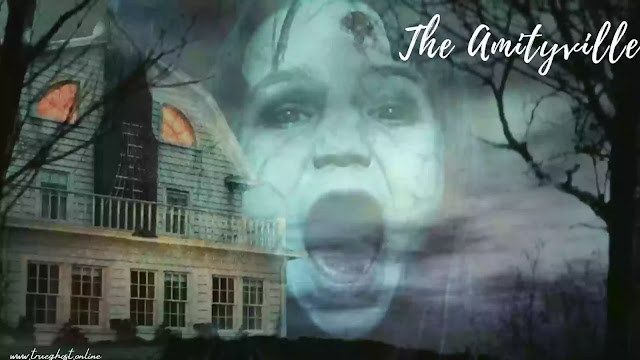 The Amityville murders are some of the most gruesome and harrowing crimes in American history. The story is so vile and evil that it's taken on a supernatural life all its own. With 21 feature films, numerous documentaries, countless books, and endless public speculation, the terrifying events that transpired on November 13 of 1974 have haunted the American Heartland for decades. Today we're going to take a deep dive into the story of The Amityville Horror.

On November 13, 1974, 23-year-old Ronald De Feo Jr. stalked from room to room in his family's three-story Long Island home and mercilessly gunned down all of the inhabitants. The house at 112 Ocean Avenue was a large Dutch colonial style home, placed within the sleepy suburban neighborhood of Amityville. The South Shore of Long Island, New York was not used to this type of extreme malice and violence, but it had arrived, nonetheless.
Rumors of the family being abusive and physically aggressive towards one another would swirl through the small coastal village after these horrific events became public knowledge. All we know for certain is that the occupants of the house that night were 44-year-old Ronald DeFeo Sr., Louise DeFeo, aged 42, and siblings 18-year-old Dawn, 13-year-old Allison, 12-year-old Mark, and nine-year-old John Matthew. The family's bodies were found lifeless laying face down. This led authorities to ask some rather disturbing questions.

How did none of the neighbors hear the gunshots? Why did the entire De Feo family remain in their beds when gunshots were going off in the house? Why would Ronald mercilessly stalk from room to room, ending the lives of his family?

Which leads us to the most perplexing element of this entire case, why on the night of the 13th did Ronnie DeFeo Jr. Enter Henry's Bar, just down the street from his house at approximately 6:30 PM, and yell, "You've got to help me. I think my mother and father are shot."
After returning to the DeFeo family home and uncovering the murders, Ronnie's friend Joe Yes wit phoned the police, who then uncovered the severity of the crimes. Initially, Ronnie was taken into protective custody after he mentioned to a police officer that he thought the crimes had been carried out by a mafia hitman named Louis Falini. When the police questioned Falini, he had a rock-solid alibi that removed him from consideration.
After further questioning exposed inconsistencies in Ronnie's story, he eventually admitted to killing his family. DeFeo Jr. was brought up on criminal charges and tried in court on October 14, 1975. His defense attorney, William Weber, attempted to provide a defense of insanity. He claimed that De Feo was acting in what he perceived as self-defense because he heard voices in his head, telling him if he did not murder his family, he would be killed.
DeFeo also claimed that he was given the weapon, a 35 caliber Marlin 336C, by a woman who was wrapped in shadow and who had black fungus covered hands. However, this insanity plea proved unsuccessful. The plea was supported by the defense's psychiatrist, Daniel Schwartz, but the prosecution psychiatrist concluded that Ronnie was aware of his actions, despite being both a heroin and LSD user and suffering from an antisocial personality disorder.
Ronnie DeFeo Jr. was found guilty of six counts of murder in the second degree on October 14, 1975.
Despite his conviction and sentencing, many questions remain about Ronald DeFeo Jr.'s heinous crime.

Why did the muzzle blasts from his 35 calibers Marlin not disturb anyone in the surrounding area? Was there truly a woman with rotting hands that proffered him the murder weapon? Was he compelled by other-worldly voices?

No one has been able to answer these lingering questions.

However, neither of these theories answers the question of, why did none of the neighbors hear the crimes take place? Were other people involved? Were the bodies killed elsewhere and then brought to 112 Ocean Avenue? Was there a demonic spirit in the house who moved Ronnie Jr. to seek retribution?

After remaining empty for 13 months, in December of 1975, the Lutz family moved into the home formerly occupied by the DeFeo's. Kathleen and George Lutz seemed like an average American family. Their three children were typical 1970s kids.
Unfortunately, according to the Lutz family, there was nothing normal about the house at 112 Ocean Avenue. The Lutzes paid $80,000for the five-bedroom home. The highly distinctive gambrel-style room, with its two small windows, initially drew them to the home, but would quickly become a symbol of evil.
Many people say that those two windows looked like eyes on a demonic face. The Lutz family moved into the house on December 19, 1975, and almost immediately claimed to be experiencing other-worldly happenings.
The Lutzes' beloved family dog, Harry, a malamute Labrador mix, was chained up in the backyard while the family began moving their possessions into the home. Harry, apparently driven mad by some unseen force, jumped the fence surrounding the property.
Unfortunately, his chain was not long enough to allow him to Landon the other side, and he choked to death, hanging himself from the fence. The Lutzes were deeply distraught and concerned for their family and well-being after this occurrence.

What had made Harry jump the fence? Was he trying to get away from something?

A family friend recommended that they get the house blessed. They contacted a local parish, and Father Ralph J. Pecoraro came and blessed the house. The blessing did not stop the paranormal happenings though. There was one room in the house that was infested with flies. No matter how many times the Lutzes would exterminate them, they would appear the next day.
The family also experienced blocked doors, mysterious sounds, and strange coincidences. On one occasion, Kathleen Lutz entered a room and the windows burst open suddenly. The Lutzes' son saw a shadowy figure moving in the hallway at night. And when he called out to it, it stopped, stared directly at him, and then vanished.
The Lutzes' youngest daughter Missy claimed to see a large pig with glowing red eyes that would come to her at night and talk to her. When the Lutzes asked her what the pig would say, Missy responded,

"He says that he's glad I'm here, that I'll always be here from now on."

Less than a month after moving in, on the night of January 14, 1976, the Lutz family fled the home. They simply could not tolerate these unexplainable phenomena any longer. They were contacted by noted mediums and paranormal investigators, Ed and Lorraine Warren, who offered to come and investigate the property. While the arrangements were being made, the Lutzes were approached by the DeFeo's former lawyer, William Weber.
He proposed a deal to the Lutzes that would include a book adaptation of their story, which would then be parlayed into film production. Weber was familiar with some Hollywood producers who'd given him a verbal commitment to producing a film based on the story of the grizzly murders and ensuing paranormal phenomena.
The Lutzes were initially reticent but eventually agreed to the idea in an effort to offset the financial burden that purchasing the former DeFeo residence had caused them. Ed and Lorraine Warren, along with a local TV news crew, set up a camera in the hallway of the now-abandoned house. The camera was set to go off every 30 seconds. They left the camera alone and began filming other segments with various members of the household and skeptics, attempting to discern if the house truly was haunted.
Ed and Lorraine Warren had a track record of being paranormal investigators. In the years since the incident, they'd been exposed as frauds, much like many paranormal investigators.
However, one key element of the story cannot be disproven as anything other than an unexplained phenomenon. The camera that was set to automatically take photos capturing one of a small boy peering out from behind a doorway. This boy was not in the house when the local TV news crew was filming. No one on the crew knew him. And, to make things even more eerie, when the photo was shown to Missy Lutz, she simply responded, oh yes. That's my friend that I used to play with.

Did the news crew accidentally stumble upon a photo of another worldly specter? No one will ever know for sure.

William Weber hired novelist Jay Anson to write a semi-fictionalized account of the happenings. The book would be titled The Amityville Horror, a true story. It was published on September 13, 1977, by Prentice Hall publishing. It's estimated that the book sold roughly 10 million copies and was turned into a mini-franchise of novels, spawning nine sequels.
Anson's book would be adapted into a movie, which was released in 1979, starring James Brolin and Margot Kidder. The screenplay was written by Sandor Stern and directed by Stuart Rosenberg. It was a box office smash, pulling in 80 million dollars, spawning 21 sequels or readaptation films, and instigating a mass obsession with the strange house at 112 Ocean Avenue.
People traveled from across the globe to pray on the front lawn, touch the house, and even attempt to steal pieces of it. The Lutzes became minor celebrities doing the late-night talk show circuit and telling their tale.
Ultimately, the attention was too much for them. They moved to California to attempt to find some peace and quiet. Today, the house on 112 Ocean Avenue still stands, leering at all those who still flock to its purportedly cursed soil. The house has changed hands a few times over the years. The iconic eye windows have been remodeled. And none of the subsequent owners have reported experiencing any paranormal occurrences.
But there are still legions of people obsessed with the house as a vortex of evil from the great beyond.
Kathy Lutz passed away in 2004, George Lutz in 2006. They largely kept out of the spotlight since the Amityville Horror movies became wildly popular. The films have gone on to be adapted, equalized, remade, spun off, and readapted. From The Conjuring to the Amityville Playhouse, to Amityville Prison, the story of the Lutz family, their brush with the supernatural, and the lingering dread has captivated multiple generations of people.

What do you think happened? Were the Lutzes actually plagued by spirits of the dead DeFeo family? Let us know in the comments below if you have the courage. Creepypasta short true horror stories for teenagers