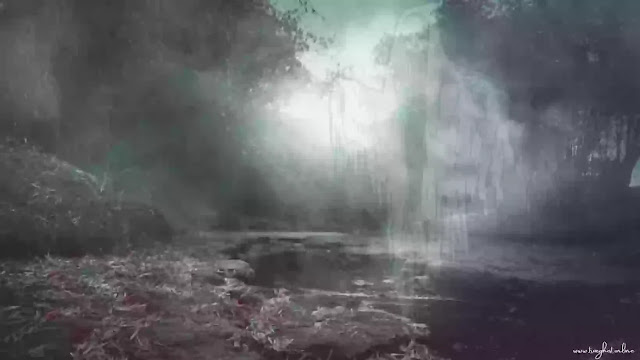 So far we have talked about all sorts of creatures. From the ones that live in the woods to the creatures that brought fear from the sea. Now it is time to bring you the legends of Pesjanek, Vodenjak, and Svećari.
Pesjanek: Creatures that brought fear to children living near the river Drava. It is said that the Pesjanek has a big yellow head that looks like a pumpkin. Its hair is as green as moss and because of the curse that was thrown at it, Pesjanek has only one eye but allegedly it can see without any difficulties. Its fingers are long and thin as sticks. Pesjanak's arms are as long and its legs look like these of a frog. It has a hairy chest and a long reptile-like tail.
Pesjanek could be heard screeching loudly when it came out of the water and that meant it is coming to snatch all the naughty children. But it didn't snatch only children. Pesjanek was allegedly also looking around for young women, married or single, that were walking around alone in the darkness.
We can conclude that this creature would bring fear to all not only the children right?
Vodenjak: Our second creature has two names. Vodenjak or Vtoplenik. And just like Pesjanek, it leaves in the waters of river Drava.
It is said that Vodenjak is larger than the average human. Its body and even face are fully covered with hair. It allegedly never touched people on the shore, but if someone was to go in the water in the hot summer afternoon, it would drag them down into its lair.
Some people even say that Vodenjak has the ability to turn into a beautiful swan. When in that form it would come up to a beautiful young woman and somehow make them pet him, allowing him to drag them into the murky waters as well.
Svećari: Our last creature or better said creatures are completely harmless but nonetheless, they provoked fear in the past when people couldn't find any other explanation about this phenomenon.
Some lights appeared due to the natural flammable gas pockets around the river and they were called Svećari. People used to believe that they were resurrected souls of people who drowned in the river Drava. Svećari would come back to life and carry candles with them thus lighting the path on this world. ( Best 3 river ghostly creature. New creepypasta short story ever told )
___________________
In the end, we can conclude only one thing: all of these legends used to have a single purpose- to scare people away from harm's way. And if you think about it when you were a child would you run away from danger if your parents just told you not to go to the river, or would you run if they told you about Pesjanek what and Vodenjak?

I know would think twice if a creature was lurking there just waiting to drag us into the deep waters of Drava.