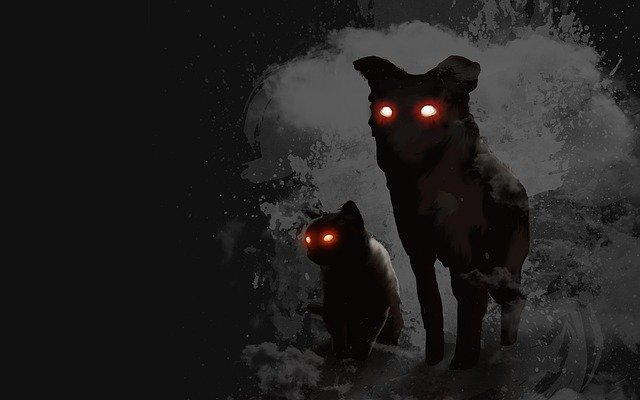 The Wampus Cat is a being from Cherokee folklore said to originally roaming the Appalachians, although reports of this beast have stretched as far as Arkansas. The beast is said to be a dark gray or black cat able to walk on its hind legs, with supposed cryptid reports putting the strange creature anywhere between 4 and 6 feet in height when standing bipedal.
According to one legend, there once was a woman who was very distrusting of her husband, so much so that she would practically stalk him. Her husband's only freedom soon became when he would go hunting with the other men, but even this only temporarily hindered his wife's paranoid behavior. Despite women being forbidden from doing anything related to hunting, she allowed her insecurities to overtake her and, flying into a rage, darted off into the forest to track down the hunting party to ensure he was with them and not at the home of another lady.
Now, running headlong after a bunch of armed hunters is never a good thing, so she was quite lucky no one mistook her for a passing deer. However, that is where her luck ran out. Her husband was true with the hunting party, but neither he nor anyone else was amused. Whether it was more because of her traipsing into forbidden territory, her scaring away any food that was in the area, or because someone wanted to take pity on her henpecked husband, the medicine man that had come along with them transformed her into a half-mountain lion, half-woman — which I suppose was a sort of slight supposed to mean "if you want to hunt so badly, do it with your own claws".
Another twist to this version is that, rather than being a borderline psychopath, the woman was really just curious about what happened when the men went off on their own. She snuck after them one night and happened upon what turned out to be a meeting where sacred magics were told — magics that belonged to men and men alone. This apparently was such an insult that they instantly turned her into a horrid beast, doomed to roam the mountains alone for all eternity.
Now, I'm not sure how close to legend those areas the Cherokee is a traditionally matrilineal society with dual-chief leadership. While men were responsible for most political decisions, women could become peace chiefs, they owned the homes, they were responsible for the execution of prisoners, and divorce was primarily their decision.
Also, several prominent women in Cherokee history were known for taking up weapons during wartime, and as all I can find regarding hunting taboos was that only medicine men were allowed to kill certain beasts (such as rattlesnake), I'm not so sure the "hunting for women is forbidden" thing could be considered plausible. Also, seeing as how the woman could have thrown the man out at any time, the first tale makes her seem borderline abusive and even deserving of her fate. But these are just the versions that turn her into an evil monster.
The version of the legend that I love the most is this one: (and we have a name this time!) running deer was a woman very beloved in her village. She was kind, healthy, and had just married one of the most sought-after braves in the whole region. Her life seemed truly blessed for the longest time, though a dark shadow lingered nearby: a horrible demon called the was stalked the woodlands surrounding her village.
The hunters were afraid to venture far, as ever since the wretched beast had appeared, they had lost many of their finest warriors to madness. One look in the creature's eyes and the unfortunate soul caught in their gaze would be as dead to the world, living in little more than catatonia, regarding their grieving loved ones without a hint of recognition or interest. Because of this, the village had much less food apart from what could be grown in the fields or fished nearby.
Whenever times got desperate enough, however, the braves would venture out again — leaving the rest of the village to wonder which household would be wailing upon their return. Inevitably, one of these households was running deer's own. Upon seeing the dead look in her own stricken husband's eyes, she knew what she must do. After pressing a farewell kiss to his forehead, she fashioned an enchanted mask made to resemble a bobcat's face and sought out the demon terrorizing her people.
She finally found the ew'ah near a stream. Running deer crept close, making sure to stay behind the demon and out of sight. Finally, as it was leaning down to drink from the stream, running deer burst from the underbrush. Upon glimpsing the magic imbued in the bobcat visage, the ew'ah, terrified, fled from the sacred mask and its wearer and plunged itself deep into the frigid waters of the stream...never to set foot near the village again.
And while running deer's village was now freed of the wah's terror, running deer herself continued to prowl the woods, intending to teach any other demons a lesson as she did they ew'ah. Over time, the mask became a part of her, and the magic within it transformed her into an immortal protector of the forest.
***