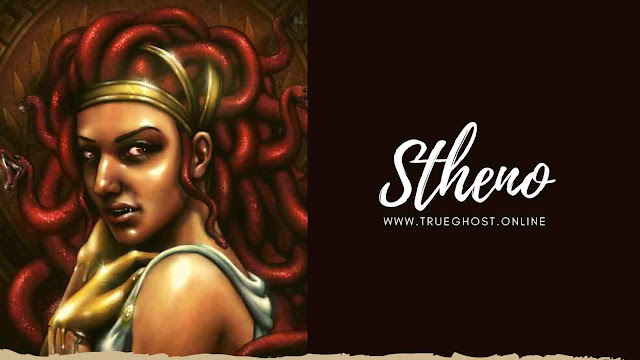 Stheno the fierce, Stheno the strong, the immortal Gorgon, who never aged. The daughter of the sea deity Phorcys, and the goddess of the deep, Ceto, she was the eldest of the three gorgons. Stheno was the most independent of her gorgon sisters, Euryale, and Medusa.
Her strength surpassed that of her sisters, and her ferocity belittled their own. She was bloodthirsty, and always eager to kill, so much so, that she killed many more men than both of her sisters combined. In appearance, Stheno was thin, and tall, with an upper body that resembled a woman, and the lower body of a huge snake. She had red scaly skin, a long protruding tongue, red snakes curling around her scaly head, in place of hair. She had eyes that glowed in the dark and could turn anyone who looked upon them into stones. And around her waist, was a snake, tied as a belt.
The later roman depictions took away some of the gorgon's hideousness, showing Stheno and her sisters, as beautiful women with snake hair, combining the temptation to behold their beauty, with the fear of instant death.
Aside from Euryale and Medusa, Stheno had other siblings, who were not gorgons. Some were still monsters, some were hags, and some were nymphs. They include the Hesperides, the Graeae, Thoosa, Scylla, and Ladon. Stheno never left her dark home in the caverns. Hidden by the darkness, She and her sisters laid in wait for unwary travelers, and those foolish enough to enter the caverns. With the great strength of a cuttlefish, and her intense urge to kill, most of the intruders, and men who wandered into the caverns, possibly met their cruel deaths, at the hands of Stheno.
In popular versions of Greek mythology, Stheno and her two sisters were not born gorgons but were beautiful women who served in the temple of Athena. When Medusa, the most beautiful of the three, became boastful, she caught the attention of Poseidon, lord of the seas. Who laid with her, right before the statue of Athena. Athena punished Medusa, by turning her into an ugly gorgon. And when Stheno and Euryale tried to defend their sister, The goddess also turned them into gorgons. After the death of their mortal sister, Medusa, Stheno and Euryale continued to live, as they were immortal, and could not die. It is sometimes said, that the two relocated to the underworld, where they were used by Hades, to torment the dead. Stheno Greek mythology. 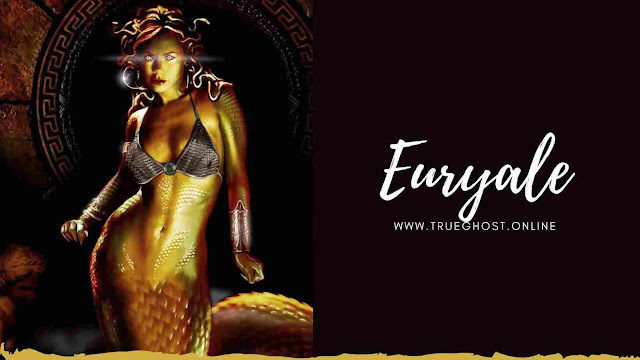 Euryale, the far springer, the wide leaper, the squid-like one. Born after Stheno, and before medusa, she was the second eldest of the gorgons. The daughter of the sea god phorcys, and the goddess of the deep, ceto, she was also the sister to ladon, thoosa, the Hesperides, the graeae, and the six-headed Scylla. Euryale neither had the might of Stheno, nor the wits of medusa, but she was the fastest and the most agile of them.
She could spring to great heights with ease, and cover far distances with just a single leap, thus, she was called the far springer. With loud deafening cries that echoed through the caves and terrifying death bellows that reverberated through the earth, she was the loudest of the sisters, the noisiest of the three. Like the gorgon she was, Euryale had the hands of brass, the lower body of a snake, skin covered with scales, sharp fangs which looked like tusks, long tongue protruding from her mouth, hair of living venomous snakes, and glowing eyes which turned people to stones.
As a distinct physical feature, however, Euryale had tough knuckles instead of claws. Her skin was of grey or violet color, and the snakes on her head were of the same greyish or violet color. Like A Stheno, she was an immortal gorgon who neither grew old nor died. Born in the caverns beneath the underworld, Euryale rarely ever left her home. With her gorgon sisters, she hid in the darkness of the caves, away from the light, laying waste to any victim who wandered into their caves.
In a different version of the myth, the three gorgons were once maidens who served the virgin goddess, Athena. When the pretty medusa incurred the wrath of Athena, by being defiled, she was transformed into a gorgon, along with Euryale and Stheno who stood with her. Being too ugly for the world, they withdrew to the dark caves. After the mortal Medusa was beheaded by Perseus, it was Euryale'ss death-bellowing screams that drew the attention of Stheno.
They both tried to avenge their sister's death but failed because Perseus was aided by the gods. With the loss of one of their own, it is said that the immortal two, Euryale and Stheno, found a new home in the underworld, as servants of hades, tormenting the souls of the dead, at his will. Euryale Greek mythology. 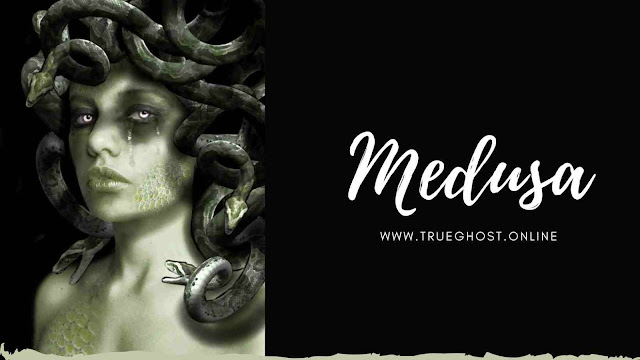 Medusa, guardian of the caves, the gorgon queen, reigning supreme not by might, nor by power, but by wits, by wisdom, by charm and beauty. The most famous gorgon in all of Greek mythology, Medusa is seen in many different lights. To some, she was a terror of nature, a hideous creature with glaring eyes, evil, dreadful and terrifying, with hatred for mortal man. And to some, she was a victim of ill fate, the one who was both a monster and a beauty, the fairest of the gorgons.
Medusa was the daughter of phorcys, the old man of the sea, and ceto, the monster goddess of the deep. And the sister to Stheno, Euryale, the graeae, the Hesperides, Scylla, ladon, and thoosa. She was the youngest of the three gorgons. According to early myths, Medusa was born a monster, deadly and hateful, hideous in appearance, the most terrifying of her sisters, with hair of living snakes, hands and claws of bronze, boar tusks as fangs, the lower body of a snake, and a gaze so piercing that it turned people to stones.
While according to later poets like Ovid and pindar, Medusa was not born a gorgon but was very different from her monstrous sisters, and family. In these myths, she was born a fair maiden, and not a monster, lovely to behold, and not frightful, greatly attractive, and not repulsive. With hair of golden locks, a face so charming, and eyes which sparkled like stars, she was a ravishing beauty, the desire of many suitors. A common detail shared by these various myths though, was that, alas! Medusa was a mere mortal, the only one amongst her sisters who was not gifted with immortality. Thus, she could be killed by the weapons of a man.
The fair medusa was once the servant of Athena, serving in the temple of the virgin goddess. Wherever she went, she was admired for her beauty, praised for her pretty looks. Soon, the showers of praises began to get to her head, and medusa gradually became boastful, likening herself to Athena, comparing her beauty to that of the goddess.
She came to believe her hair was prettier, and her face was lovelier. One day, her golden locks, caught the attention of the sea god Poseidon, who immediately lusted after her. At the coming of dusk, Poseidon quietly crept into the temple and seduced medusa, mating with her in the sacred temple, defiling her in front of the virgin goddess's statue. When dawn came, Athena appeared before medusa, ready to unleash her wrath.
The lord of the seas was blameless, and could not be punished, so Athena directed her anger towards her defiled servant, the mortal medusa. She turned medusa's golden hair into poisonous snakes and made her face so terrible to behold that the mere sight of it would turn anyone into stones. Medusa became uglier than her sisters, doomed to hide her ugliness, away from the world, for the rest of her days.
While in some stories, even as a gorgon, medusa remained beautiful. Even as a monster, her charms could still not be resisted, tempting men to meet her gaze, and luring them to their deaths. In another version of the myth, medusa's sisters, Stheno and Euryale, were also once beautiful maidens and served alongside her in the temple of Athena. After turning Medusa into a gorgon, as punishment for being defiled, and being boastful, the goddess also turned Stheno and Euryale into gorgons, for standing with their sister. Medusa became pregnant with Poseidon's children, after the incident at the temple. The gorgon would later be slain by the hero, Perseus, and from her headless body, the winged pegasus, and the giant, Chrysler, would be born. Medusa Greek mythology. 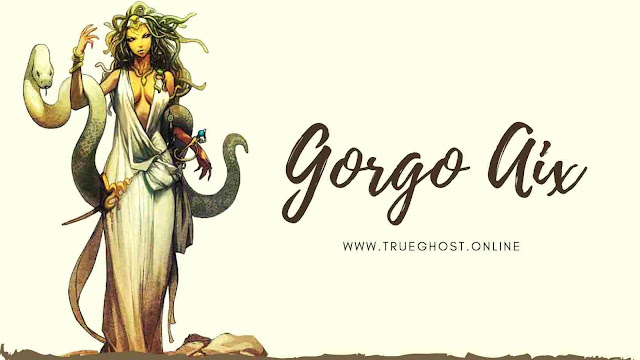 Many know the myth of the three gorgons, but very few know of the very first gorgon to exist in Greek mythology. Gorgo Aix, the elder Gorgon, the spirit of the stormy clouds.
Gorgo Aix was an ancient Gorgon, who existed when the world was still young, during the time of the ancient titans, before the birth and reign of the Olympians. It was a monstrous goat, the alter ego of Amalthea, the goatish nurse of baby Zeus. Its name literally meant "terrible goat", or "Fierce storm". Similar to the later Gorgons, Gorgo had living serpents as hair, tusks as fangs, and long lolling tongue. However, it had the body of a goat, an ugly flat nose, and was of indescribable gender.
Gorgo could not be referred to as he, or she because it was neither male nor female. It was described as either a woman who had manly features, such as a beard, or a man with womanly attributes. Gorgo was an effeminate monster and was sometimes said to be the mother or father of the 3 gorgons. Before the 10-year-long war between the titans and the gods, Gorgo had spent most of their life, hidden away by Gaia, in a secret Cretan cave. And during the war, the monstrous goat joined forces with the Titans, the enemies of the gods.
Gorgo was slain at the start of the war, by Zeus who then used the goat's skin to construct his famous Aegis, placing its hideous head at the front of the shield. This possibly explains why Zeus already wielded an aegis decorated with a gorgon's head, long before the time, and death of the gorgon - Medusa. Modeling after her father, Athena also placed the gift of Medusa's head on her own aegis. Like father, like daughter.
The images of Gorgons were carved on objects as protection against evil, in the latter times, supposedly due to their terrifying gaze. Now it is rather surprising. Why would a creature which brought only death, terror, and misery, would be used as protection against evil. To some, there was nothing good about the gorgon, It was like using evil to ward off evil. The reason lies in the myths themselves. The Gorgon was a creature of duality and was not evil in its entirety.
On one hand, and as itself, it sought to only satisfy its evil tendencies, and on the other hand, it became a tool against evil. The blood of the gorgon was said to be the cure to all afflictions, and plagues. With the gorgon's head, Perseus fell the mighty Kraken and ended the rule of the wicked king, Polydectus.
In the hands of Asclepius, the blood drawn from the gorgon's left side was used to end lives, and the blood drawn from the right was used to raise people from the dead. In the hands of Erichthonius, the two vials of the gorgon's blood were used as a deadly poison and the cure to all diseases. Besides, Ste rope placed a lock of the Gorgon's hair in her hometown, Tegea, to protect it from enemies, and the lock cast great terror into any enemy who beheld it. Gorgo Aix Greek mythology.
***