What would you do if you heard the horrifying scream in the middle of the night? A screen by itself representing danger is terrifying by itself. But what if the scream isn't that of an animal or a human in distress but a screaming warning of upcoming danger. 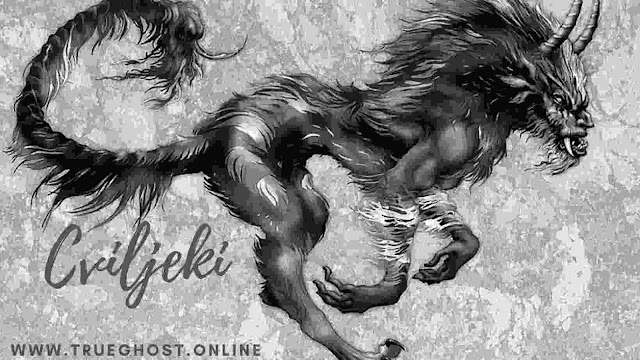 Cviljek is one of the mythological creatures that have a long history in Slavic folklore. It is said that the myth of Cviljeki goes as far back to the time and people still used to worship the Slavic god Perun. These creatures are also widely known as the Drekavci. But the story of their origin differs from region to region. As always, I will focus on the myth that is known to my small part of the land.
In Croatian zagorje it is believed that Cviljeki is the messengers of death They are small creatures covered in fur, with long claws, and they're producing a horrifying scream That scream determined their name because "civility" means "to screech" in Croatian. It is said that their scream is painfully loud and unlike any animal scream known to man. The most accurate description I have found is that Cviljek sounds similar to a wolf howl? It is interesting to say that here in my small part of the world there are no wolves and jackals.
So what are Cviljeki? The legend says that they are lost souls of warriors who gave up their faith moments before death. By doing that they are transformed into these hideous creatures That are doomed to walk the world announcing and bringing death to others. Unlike other doomed souls Cviljeki remains in a physical form. But how do they decide whom to doom? That part remains unknown. Some stories say that they seek those who are lost Others say that they wandered the land and randomly seek houses to haunt with their howl. But maybe the most interesting story about Cviljeki is the story of the Blood Moon.
The phenomena of the Blood Moon is widely known as a celestial event that is often linked to mystical One of this story says that a long time ago a terrifying war broke out on our lands.
It is said that it was one of the worst wars mankind has ever seen. Men, women and, even children fought for their lives. One night warriors stormed into a village. They slaughtered everybody. That was when the first Cviljek came to be.
It is said that as people died the full Moon in the sky turned blood-red feeling the pain down on Earth And as the last warrior died, he cursed the Old Gods for not aiding them.
Now when a blood moon appears in the sky every tortured soul transforms into a Cviljek, seeking revenge amongst the living. In the end, you will hear a true story about a woman who escaped death after a close encounter with a Cviljek and It is up to you to believe it or not. For the sake of keeping her identity, the name in the story will be changed.
___________
Sofia was just a young girl when her parents moved into a neighboring village and she with them. Shy by Nature She wasn't the type of person to make friends easily. But Sofia had a best friend named Kristina. Two girls grew up together and were inseparable.
So once Sofia moved to the next village two girls had a difficult time being separated. One day Sophia's parents agreed to let her have a sleepover at Kristina's place. The girls were thrilled. Agreeing that their friendship will eventually change, Sofia and Kristina decided to make they're every encounter something memorable. So Sofia came up with a plan.
Once the night falls They'll sneak out of the house and go visit the Unknown soldiers grave. It was the place near Kristina's house. They heard the stories of these grave millions of times and it was at the same time frightening but somehow exciting.
It was said that the soldier was murdered in the part of the woods and his body was buried without any kind of marker that would let people know of his last resting place. In that spot, not a single tree grew. Not ever weeds. Just moss. Thick, green moss.
Once the night fell, two girls went to bed and wait until Kristina's parents fell asleep Once they were sure today were sound asleep Girl's sneaked out of the house carrying nothing but an oil lamp. As they walk through the woods, they giggled and screamed but the fear was thrilling. So they came to the unknown soldiers grave. At the moment Sofia and Kristina stepped on the moss, a horrifying scream ripped the silence. In the darkness, Girls shouted in fear and starts running back home. All of a sudden the same bone-chilling scream appeared right behind them.
Sofia said that she heard a dull sound of the body falling to the ground Kristina's scream and the breaking of the glass of the oil and Kristina was carrying She turned around only to see a small fur-covered creature piercing its long claws into Kristina's neck Frightened out of her mind Sofia run towards Kristina's house to get help The only thing she noticed was the blood moon rising in the sky Her screaming and calling out for help woke up the entire village Soon Kristina's father and few other men went back to the woods Only to find a broken oil lamp that has burned down and nothing else. Not the single drop of blood or any other sign of Kristina. They searched for Sofia's best friends for days and even months. But Kristina was never found again.
So there you have it. Cviljeki. Vengeful creatures that bring death and The Blood Moon with yet another horrifying legend following it Be sure to look out where you're going when seeking for adventure and Remember something is always lurking out there Screaming and seeking to rip you apart.
***