Most Abundant Ghost Place In The World 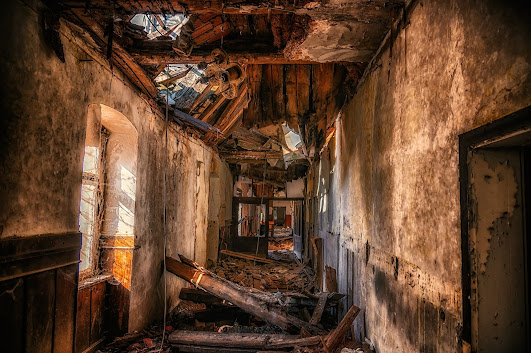 Most Abundant Ghost Place In The World

Today we are going to talk about five abandoned places in the world. So, let's know what actually it is.
Sukhumi train station
This train station is located in Abkhazia, Georgia. Sukhumi train station is an abandoned train station that was used last between 1992 to 1993. This train station was once a thriving rail hub for the city. When the railway finally reached the city in the 1930s construction work began with the first station opening in 1940. The station was built in the Stalinist architectural style which made it both beautiful and foreboding in equal measures. The line later became incorporated into the Transcaucasia railway with including all the facilities built in the mid-1950s. Sukhumi train station was closed during the war in Abkhazia when rebel forces and loyalist Georgian came into violent conflict during the early 1990s.
Talking about its present situation, the train station is abandoned and partially reclaimed by nature making Sukhumi train station an interesting as well as creepy experience.
SS airfield
This is a wrecked ship located at home bush bay which is used to be home to various ship-breaking operations during the mid-20th century of Sydney, Australia. Numbers of wrecked hulls remain in this area including the most famous among them which is the SS airfield. This ship was constructed and are used by the United Kingdom in 1911 and later it was named SS airfield in Australia in 1912 which was used as a steam- collier. SS airfield was used for transporting supplies during world war 2 and back to service as a steam collier post-war until it was decommissioned in 1972. When industrial operations scaled-down, the bay became a dumping ground for a large range of unwanted material from waste to broken up ships even toxic industrial waste.
Talking about its present situation, the ship has been reclaimed by nature by making its look amazingly beautiful, but it is still a creepy abandoned shipwreck.
New Bedford Orpheum
This building is an abandoned theater that is located in New Bedford, USA. Orpheum theater opened its doors on April 15th,1912. If it sounds familiar then it was the same day that the Titanic sank. This theater is believed to be the second oldest in the nation which was built a year after the Orpheum theater in Los Angeles. When the theater was in use, it seated almost 1500 people. The Orpheum theater was closed in 1958 and was only opened for special occasions thereafter. It was later sold to a tobacco company that used it for storage in 1962, but it is now largely invalid.
Talking about its present situation, the back of the theater is currently using for a supermarket, but the rest of the space is still empty. It is come to know that, there are plans in the future to revive the building by a non-profit organization. Their objective statement says they are out to promote arts, culture, diversity, and education, to hold, organize and promote events for public participation, to manage the theater to the benefit by using its stated purpose, and to do all acts permitted by a corporation organized under chapter 180 of the general laws of Massachusetts,2004.
Berlitz-Heilstatten Hospital
This hospital is situated near Berlin in a small town called Berlitz which is famous for asparagus. Berlitz hospital is considered a governmental building that stops to provide services from around 1994-1995. It was built at the beginning of the 20th century to provide treatment for patients who suffered from tuberculosis. The hospital contained almost all needed facilities during that period of time comprising around 60 buildings. When this place was in use, it could be housing 12,000 patients at the same time.
Heilstatten hospital was used as a military hospital during the world wars and was also commandeered for Nazi experiments during World War 2. The building was captured by Soviet forces during the final days of the war, and also considered their biggest military treatment center outside of Russia until 1994. After the retreat of Russia in 1995, the area was up for sale, but most of the buildings immediately began to decay. The talk about its present situation, small parts of it are still in use for neurological research and treatment but the majority of the giant field still stands abandoned.
IM cooling tower
This tower is located at Charleroi, Belgium in an area called Monceau-Sur-Sambre. IM cooling tower is left abandoned since 2007. The cooling tower which was converted to an abandoned power station still dominates the skyline, but no longer produces steam. It was constructed in 1921 and was also considered one of the largest coal-burning power plants in Belgium during that period of time.
Talking about its features it was able to cool 480,000 gallons (ca. 1,817 m³) of water which was about 1.8 million liters per minute. By the 1970s new components were even added to the power plant that could also use gas power. Late, a report found that the power plant alone was responsible for producing 10% of Belgium's carbon-dioxide emissions. Due to such reasons, protest from Greenpeace in 2006 gave the i.m cooling tower a lot of negatives attention ultimately leading to its closure in 2007. After this, there were lots of reports of looting on this tower by metal scrappers, but today there are often security guards. the tower is still abandoned but it continues to stand as a popular location for urban visitors.
***